I have been trying to write about my landlord, housemate and dear friend Paul's passing and just haven't been able to. I really haven't felt the grief yet. I can tell you all the wonderful things he did for me. And all the things I will miss.

Mostly, Paul was just really sweet. I was nervous about moving in here but found out he was so respectful of my privacy. I didn't know that we would become great friends. My favorite time with him was in the morning. I would get dressed, come downstairs, go into his office and he would be at his computer. His pug, Bella would be in there with him in her little bed. I would sit on the floor and play with her and Paul and I would chat.

When I first moved here, I started radiation treatments for breast cancer and one morning, he called upstairs and said, “Chrissy...Lunch is ready.” I thought that was odd since I didn't know he was making me lunch, but I came downstairs and he had baked crescent rolls with cream cheese and chicken.

Paul was so supportive of anything I did. I belonged to a writer's group and I don't have a printer so I would email what I had written for the group to Paul, and say, “Poppy, can you print this for me?” He would and usually thought what I wrote was good. I started calling him “Pop” after a while, since he was like a father. Then it went to “Poppy”. When he would be staying at his girlfriend's house, he would write me a note to let the dog out and then he'd sign it, “Love, Poppy.” He enjoyed the concerts I was in. He came to about four of them. He enjoyed meeting the women I sing with. One time our women's chorus sang with the North Coast Men's Chorus and we all went to a gay bar downtown called Union Station. Paul seemed to love it. One man stood up on a table and either sang like Judy Garland or Liza Minnelli, I can't remember. A few months later, he wanted to know when we were going back, only instead of calling it Union Station, he called it Union Square.

One of the most special times I had with Paul was when he took me to Great Lakes Brewery. It was just the two of us and we had lunch and our beers. Paul loved beer. He talked about his wife, and welled up with tears when he said they were so glad she had finally passed because she was in so much pain. He got emotional about a lot of things. We went to see the documentary, Bully. It was about the bullying in our schools and after it was over, he started crying. There was a mom who's son had committed suicide from being abused by the kids at school She was inconsolable at that point and was sitting on the floor in her bedroom as her husband tried to help her with this pain. Paul said through his tears, “Did you see that poor woman who couldn't even get off the floor?!!"

This past Christmas he was able to put up his little tree and lights. Last year, as he was decorating the house, he said he missed the Christmas when his son's were little and he'd be up all night putting their toys together. He talked a lot about his boys. Chris, Matt and Tim. All three live in different states. I have gotten to know them a little bit better since Christmas when Paul got really sick. They remind me of Paul in one way or another. When he started getting sick, they sprang into action. Then his sister Peggy came in from California and helped. I don't know if she got much sleep between staying at the hospital with Paul and taking care of him at home. I can tell you he was in good hands. He spent two nights at home before he died. The first night I was saying goodbye to his girlfriend Barbara, and figured he didn't hear me, but he took my hand and kissed it. The next night, I fell asleep around one and woke up at 5 am. I knew this was the end and I put my braces and shoes on and grabbed my crutch. I stopped myself and after a short prayer, I realized that this was just for family. I went back to bed and the wind chimes outside my window blew gently. As gentle as Paul was. I woke up and heard Peggy on the phone. I went downstairs and she told me Paul took his last breath just moments ago. Matt was there and Peggy and Bella, Paul's dog. All Matt and I had been doing since he came home was joke with each other, but he grabbed me and hugged me crying. I kept thinking how fortunate I was to know Paul but also to witness the love his family showed him. I honestly don't have much else to say. He loved reading and his friends and his family. He loved his dog and watching Jeopardy. He loved animation and exercise. He was smart and did so much for me that I was almost embarrassed at times to tell people. I went to my car once and realized I had four new hubcaps. Two had fallen off and two were cracked. His girlfriend, Barbara bought them for me and Paul put them on while I was taking a nap or a shower or something. When I was diagnosed with cancer, he took me to many appointments, one at 6:00 am. I will miss his smile and his laughter. I am lucky to have his dog to keep me company. I will take with me his sweet spirit and his love. I am grateful that when we would say goodnight to each other we started saying, “I love you.” I don't regret any time I had with him…

A week ago, when everyone was gone, I went into his office and started crying. At that moment I heard Paul's Wallace and Gromit alarm clock go off. It was a gift to him from either his sister or his girlfriend, Barbara, and I never heard it before. He LOVED Wallace and Gromit British animation. We would imitate them sometimes. 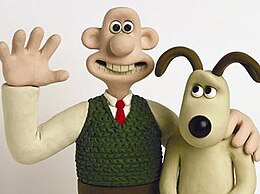